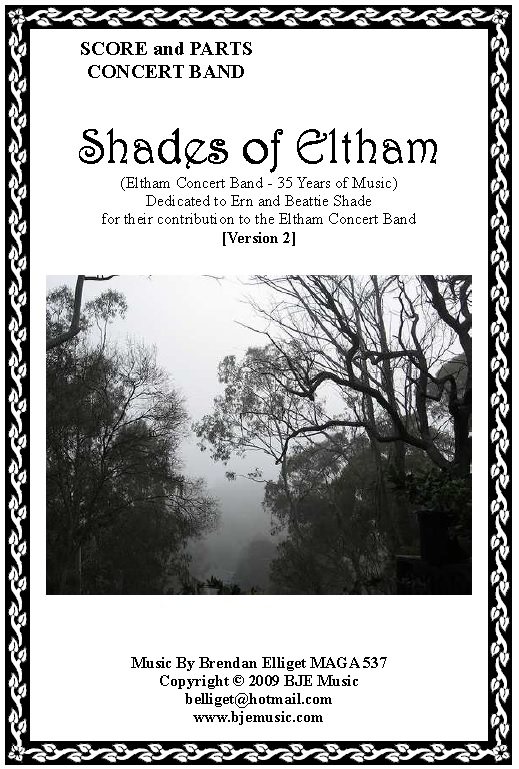 SKU: 047
A$30.00
A$30.00
Unavailable
per item
Shades of Eltham (Eltham Concert Band - 35 Years of Music)
Dedicated to Ern and Beattie Shade for their contribution to the Eltham Concert Band. The title of this piece is a play on words of course indicating both the Shades themselves and the various “shades” or moods of the music or even perhaps, the “shady” bushland setting of the area itself. I composed this piece with a few simple ideas in mind. The letters “E” and “A” in the word “Eltham” suggested to me an interval of a fourth, or the other way around, an interval of a fifth – which are both used in many of entries of the themes and musical motifs throughout the work – especially the brass. There are several variations and counter melodies within the work: a bright “two-four” march like theme, probably the “Main” theme, and a variation of this theme in slower “three-four” time in a minor key with two counter melodies - representing a gentler contrasting mood. On occasions, two or even three themes play simultaneously. A bridging passage in “four-four” occurs about the middle of the composition leading up to a restatement of the main theme. The final climax or Coda actually has both “three four” melody against the “two four” one resolving in the last few bars in a dramatic way. I hope you enjoy my musical tribute to the “Shades”.
Parts for Eb and F Horns, Bb and Eb Basses are included.
Grade = 4  Duration = 7:20 Mins
This arrangement's score and parts can also be viewed and played at SCORE EXCHANGE:
http://www.scoreexchange.com/scores/95290.html
(You will need to download and install the SCORCH PLUG-IN)
Add to Cart
PDF Preview
Recorded with NotePerformer
>