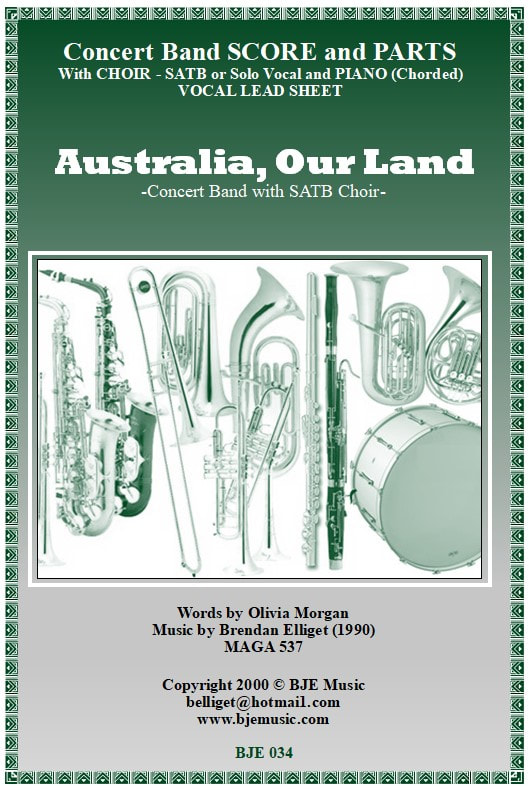 SKU: 034
A$30.00
A$30.00
Unavailable
per item
The words for this song were written as a poem by my late mother-in-law Olivia Morgan (94) about the love of her adopted country Australia. She originally came from her ancestral home in England when she was 14. She spent her early years in Australia on a sheep/wheat station. Many years later she wrote a poem. Olivia asked me to set her poem to music, which I did in 1990 in the style of an anthem. It has since been performed by the local symphony orchestra and full choir. Very appropriate for Australia Day!
This setting is for SATB Choir Solo or Unison Voice with or without piano accompaniment and Concert Band. Solo  Vocal and SATB Choir Lead Sheets and Piano Accompaniment included.
An MP3 recording with vocals sung by my daughter Christine Neaves as a solo can be found below.
This arrangement's score and parts can also be viewed and played at SCORE EXCHANGE:
http://www.scoreexchange.com/scores/135572.html
(You will need to download and install the SCORCH PLUG-IN)
Also available for Brass Band and Orchestra - See links below.
Add to Cart
PDF Preview
Recorded with NotePerformer 3
Solo Voice - Christine Neaves
Full lyrics:
Australia Our Land

Our country's bounteous gifts
Extend from shore to shore
In history's place, Her pride and grace
Will live for ever more
This land that keeps our heart
Afar though we may roam
On land or sea
Yet still to be Australia our dear home.
(Repeat last two lines)